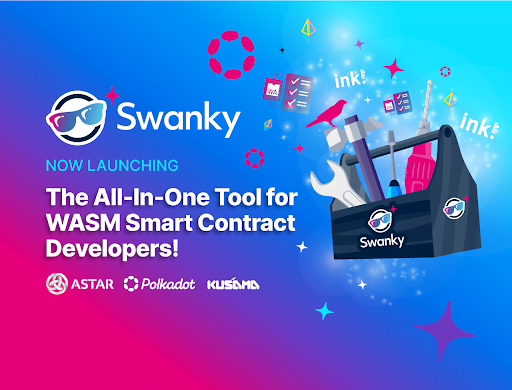 The Swanky CLI is a simple tool that developers can use to create a smart contract. The CLI helps write and compile smart contracts, perform integration tests, and manage accounts. Swanky comes with pre-installed project templates and front-end codes so that developers do not have to build everything from scratch. This quickens smart contract development and project deployment and allows developers to handle multiple projects.

1) Hello I want to welcome everyone to Swanky!!

What is Swanky Suite?

This thread will give you a deep dive on why Swanky Suite is important and how you can get started using it today!!

Developers also have access to Swanky Node, a blockchain based on the future-proof Substrate framework that enables pallet contracts and does not require waiting for block time since it is seal enabled, which makes it easy to quickly verify or authenticate products. Swanky Node can also run in persistent or non-persistent states and allows multiple developers building in different parachains to use chain extensions and pallets.

Astar Network’s Swanky is future-proof as it supports both WASM and the Ethereum Virtual Machine (EVM). While Ethereum is ushering Web3 via smart contracts, it is necessary to support two VMs so that developers are ready for the industry’s move to WASM from EVM.

Also, Henskens points out that Swanky will make it easier for developers to transition from Web2 to Web3. According to him:

With WASM smart contract usage and building still at a very early stage, tooling and documentation are essential to bootstrap the WASM developer activity. Swanky makes it incredibly easy for developers, especially those coming from Web2 to Web3, to start exploring this new environment.

Swanky solves a critical problem for developers looking to transition from Web2. Currently, languages used in the Web2 environment keep developers out of Web3 because they cannot be translated into Ethereum’s Solidity. Consequently, developers making the switch cannot build dApps for EVM without first learning Solidity. However, with Swanky, developers can focus on improving smart contracts without worrying about time spent learning languages.

Astar Network provides tools that support interoperability between chains and allows developers to build dApps powered by EVM and WASM smart contracts. Astar also allows developers to earn via staking through its Build2Earn model. Due to the ecosystem’s flexibility, the Astar Network is now of Polkadot’s top Parachains as it helps with growth in the Polkadot and Kusama communities.

UK Court Rules Craig Wright Has No Copyright Claim On Bitcoin The ruling is the latest in a string of...

Shiba Inu scores massive 1.3M holders amid coming up Shibarium Since the beginning of 2023, Shiba Inu added a total...