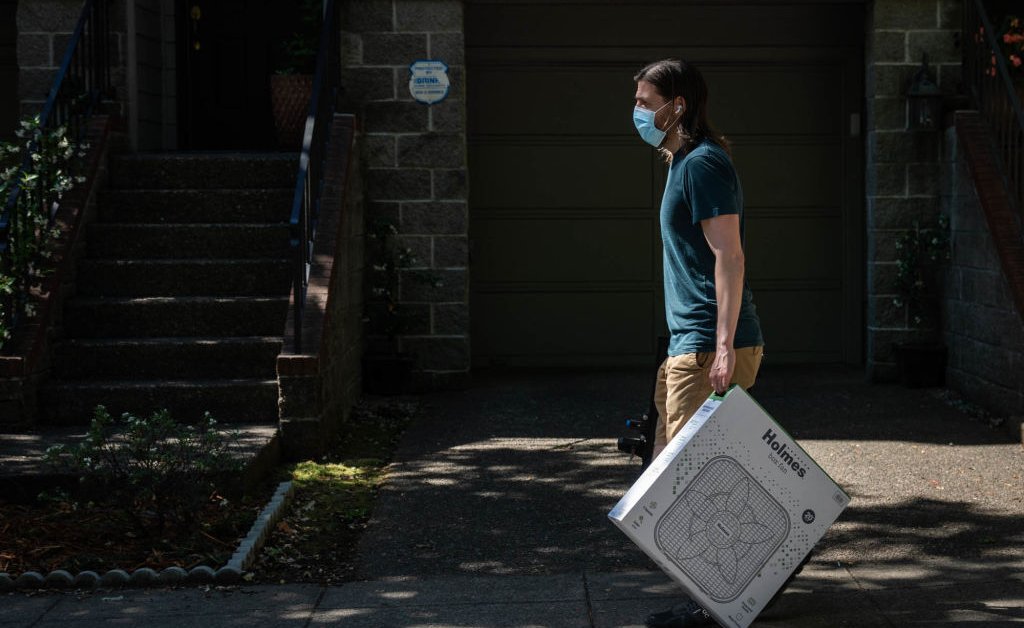 The new initiative, slated to take effect in 2024, will cover payment for devices such as air conditioners and air filters for Medicaid members with health conditions who live in an area where an emergency due to extreme weather has been declared by the federal government or the governor’s office, according to the Oregon Health Authority.

It aims to help people “dealing with the impact of extreme heat, wildfires and other catastrophes caused by climate change,” OHA director Patrick Allen said.

The measure is part of what the Centers for Medicare and Medicaid Services, of the U.S. Department of Health and Human Services, described as “groundbreaking Medicaid initiatives” in Oregon and Massachusetts.

Read more: Why Extreme Heat Plus Pollution Is a Deadly Combination

The federal agency on Wednesday renewed Medicaid waivers for both states. Those waivers will cover non-medical services such as food and housing assistance for people with clinical needs in a bid to tackle the underlying social issues that can cause poor health.

Oregon will receive $1.1 billion in new federal funding for the new Medicaid initiatives covering climate change, nutrition and housing, described as “health-related social needs” by health officials. The state will pilot the changes over the next five years.

“Health care does not occur in a vacuum—it’s clear that we must look beyond a traditional, siloed approach to truly meet the needs of people, particularly those experiencing complex challenges,” Oregon Gov. Kate Brown said in a statement.

Oregon’s new Medicaid plan stands out for two first-in-the-nation policies: its climate change coverage, and a measure that will keep children continuously enrolled in Medicaid until age 6 without families having to re-enroll every year.

Officials in the Pacific Northwest have been trying to adjust to the likely reality of more intense heat spells following the region’s fatal “heat dome” weather phenomenon that prompted record temperatures and deaths in the summer of 2021.

About 800 people died in Oregon, Washington, and British Columbia during the heat wave as temperatures soared to an all-time high of 116 Fahrenheit (46.7 Celsius) in Portland and smashed heat records in cities and towns across the region. Many of those who died were older and lived alone.

In addition to covering payment for devices that maintain healthy temperatures and clean air inside the home, Oregon’s new Medicaid plan will also cover generators in the case of power outages.

“It’s based on the medical indication that you’re particularly vulnerable to heat events, or you have medical devices that are tied to being powered, or sensitive to smoke,” Allen said.

Oregon Medicaid members with health conditions will become eligible for such devices if they live in an area where an emergency due to extreme weather has been declared.

Climate change can pose risks to health, including heat-related illness during heat waves. Extreme weather events such as storms and floods can also negatively impact health, both physical and mental, and disrupt food systems. The risks disproportionately affect low-income communities, older people and those with underlying health conditions.

Medicaid is the federal-state health care insurance program that helps pay for health care for low-income people of any age. Each state determines eligibility and the full scope of services covered. The federal government reimburses a percentage of the state’s expenditures.

“There’s lots of discussion in climate change about making sure that as we address the health risks of a changing climate, that we do so in a way that reduces inequities,” said Kristie Ebi, professor in the Center for Health and the Global Environment at the University of Washington.

Oregon’s Medicaid initiative “is an opportunity to reduce some of those inequities for people who can’t afford, for example, a generator to make sure that life-saving equipment continues to run during heat waves,” Ebi said.

Read more: Extreme Heat Makes It Hard for Kids to Be Active. But Exercise Is Crucial In a Warming World

As for Medicaid coverage of food and housing assistance, Oregon and Massachusetts are expanding eligibility for such services.

Food support can include tailored meal plans based on health needs and Medicaid-funded prescriptions for fruits and vegetables. Housing services can include rental application assistance, moving help and eviction prevention.

Massachusetts will provide additional meal support for Medicaid members who are children or pregnant women with special clinical needs, according to the Centers for Medicare and Medicaid Services.

In Oregon, people experiencing life transitions, including those experiencing or at risk of homelessness, can be eligible for rental assistance for up to six months.

Claire Rush is a corps member for the Associated Press/Report for America Statehouse News Initiative. Report for America is a nonprofit national service program that places journalists in local newsrooms to report on undercovered issues. Follow her on Twitter @ClaireARush.

How Gene Editing Could Help Solve the Problem of Poor Cholesterol Cardiovascular disease is the leading cause of death in...

TB and mental trauma Proper support continues to elude TB patients in India. Life came to a sudden halt for...

Why Do I Have Acne And My Siblings Don't? - Nedufy You have acne, and you are sick of it....

The actual benefits of turmeric during menopause – Health & Healthier

The actual benefits of turmeric during menopause - Health & Healthier Menopause is the phase in a woman’s life that...

Six children die with Strep A bacterial infection There has been at least one death of a child in Wales...

What is Strep A and what are the symptoms to look out for?

What is Strep A and what are the symptoms to look out for? Another UK child has died from this...

Tiny Blood Clots May Be to Blame for Long COVID Symptoms, Some Researchers Say

Tiny Blood Clots May Be to Blame for Long COVID Symptoms, Some Researchers Say Blood clotting is a normal, healthy...