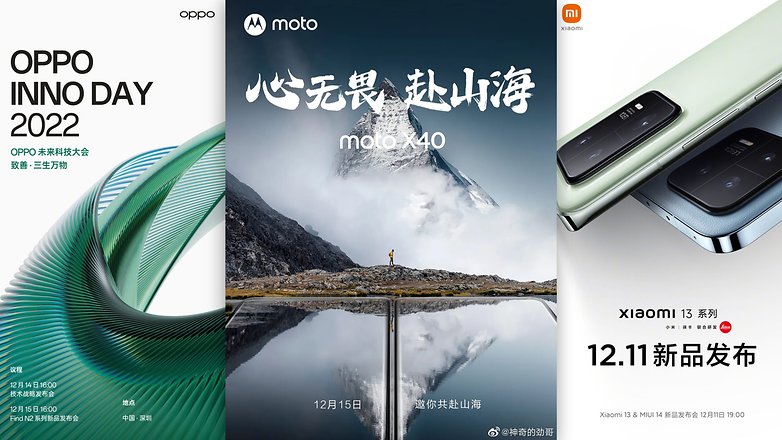 After the Snapdragon 8 Gen 2 announcement, the floodgates are open for the 2023 flagship season. While China is taking pole position with its brands first to announce their devices equipped with the SoC, Americans can expect at least one model to arrive on US-shelves. Motorola is launching this December 15 its Moto X40 flagship, which should reach North America as the Moto Edge+ (2023).

Motorola and Oppo vie for attention

We are in for a few hot days. From a US point of view, we can be a bit more relaxed about the three product presentations, but sooner or later at least one of the launches will also land in America. But why does this MaTT German is talking about three events—if the headline only mentions two? Correct: Motorola and Oppo have already officially invited us to China for next Thursday, December 15. Xiaomi, on the other hand, announced an earlier event for the Xiaomi 13 and Xiaomi 13 Pro on December 11.

From Motorola, we expect the Moto X40, which will appear in Europe and Latin America as the Motorola Edge 40 Pro. The primary goal of this event should be the presentation of a smartphone, which is the first Motorola device to have the Snapdragon 8 Gen 2 installed. Furthermore, we expect a 6.67-inch curved AMOLED display with a refresh rate of 165 hertz. On the rear, the IP68-certified X40 is said to boast a 50 MP main, 50 MP ultra-wide-angle, and a 12 MP telephoto camera.

If the US branch of the Lenovo subsidiary keeps its (confusing) naming standard, expect to see the same phone on American shelves as the Motorola Edge+ (2023), following the 2022 model, which was a rebranded Moto X30/Edge 30 Pro.

Oppo is allowed to go one price range higher at its INNO Day. Next Thursday, we will be presented with two new foldables in addition to the second chip developed in-house and AR glasses. The successor of the Oppo Find N with an Oppo Find N2 and the first flip-foldable from the company. So far, the latter is called Oppo Find N Flip or Oppo Find N2 Flip, but we will see.

The Oppo Find N2 will likely come with an internal 7.1-inch foldable AMOLED display and will once again indulge in the unique form factor. However, I suspect that it will unfortunately only be available in China again. The counterpart to the Motorola Razr 2022 (review) and Samsung Galaxy Z Flip 4 (review), on the other hand, is supposed to be the first Oppo foldable to kiss European store counters as well.

Next Sunday, all tech eyes will be on the Xiaomi event, which seems to have a few products in store. Among others, a Xiaomi Watch S2, the Buds 4, and a Smart Projector are expected to be presented. I wouldn’t rule out a fancy router and another air purifier either. Of course, we are most interested in the Xiaomi 13 and Xiaomi 13 Pro.

Which event are you most looking forward to, or will you be following? Feel free to let us know in the comments.

Price: (as of - Details) Make an impact in more ways than one. Introducing moto g stylus. Pop out the...

Google fans should not miss this: Pixel devices are up to 33% cheaper right now | News 4 Social

Google fans should not miss this: Pixel devices are up to 33% cheaper right now | News 4 Social Google...