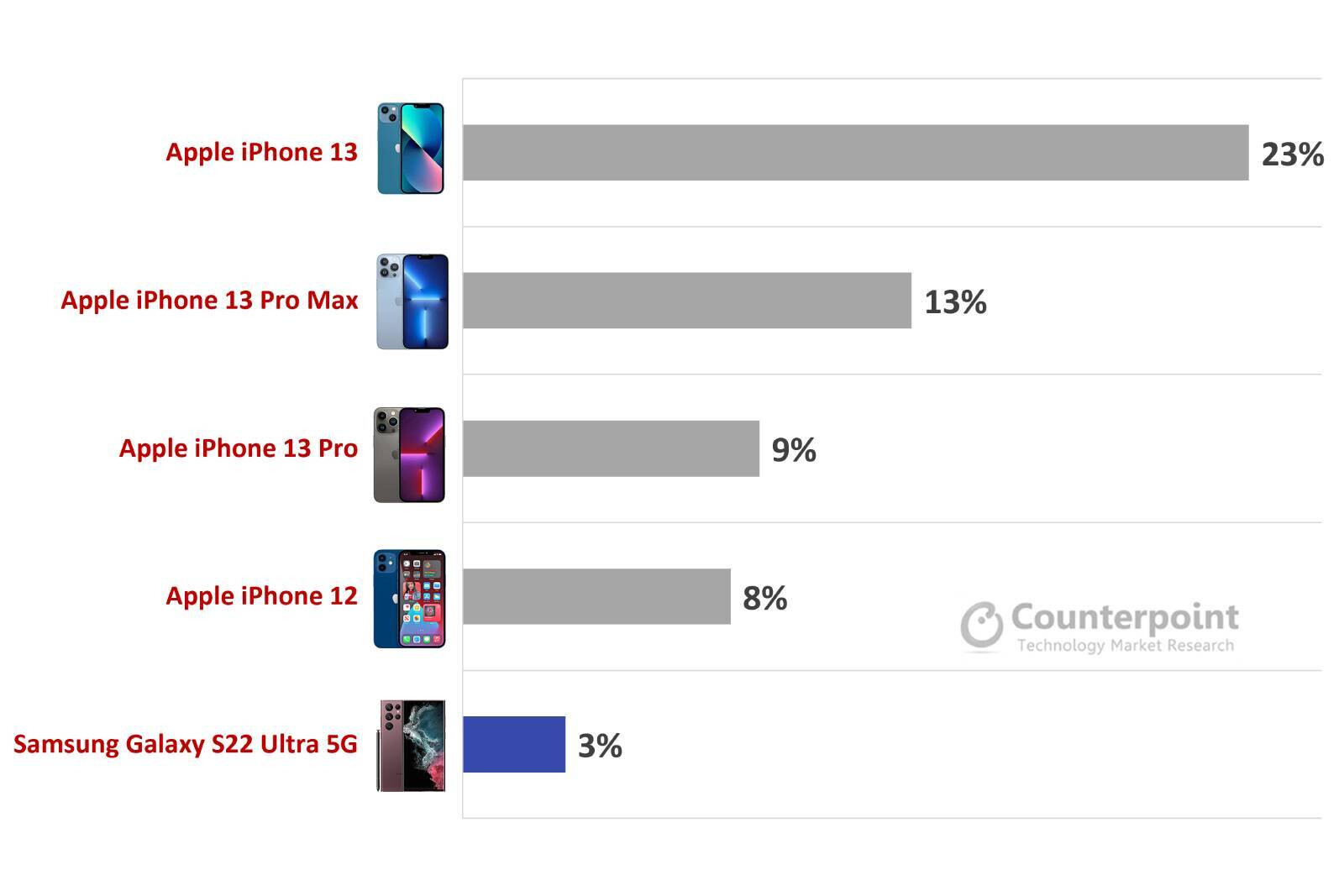 Apple has (yet again) been crowned the premium smartphone market leader and the Android competition isn’t even close. The news follows reports that the iPhone dominated the smartphone industry in the first quarter.

Almost two-thirds of all premium smartphones were iPhones

New data coming from a Counterpoint Research report reveals that Apple’s iPhone line accounted for an outstanding 62% of worldwide premium smartphone sales in the quarter ended March. In other words, close to two-thirds of every premium smartphone sold was an iPhone. A premium smartphone is classed as any device priced at $400 or above, meaning products like the Galaxy A53 5G and iPhone SE are included.Compared to Q1 2021 when the Cupertino giant was riding high on the iPhone 12 and 5G wave, Apple’s share is up five percentage points and the gap with rivals like Samsung and Xiaomi has only gotten wider.

So what do these numbers represent? For one, they mark the second consecutive quarter where Apple’s share is above 60%. They also represent the iPhone’s highest Q1 result since 2017, when the iPhone 7 was considered new, and the iPhone X was simply a rumor.

On an individual device basis, the iPhone 13 — currently the world’s best-selling smartphone — absolutely obliterated its rivals. Almost one-in-four purchases can be attributed to the model, with its share standing at 23% for the quarter.

The Galaxy S22 Ultra was the best-selling Android flagship

As is usually the case, Samsung was found to be the second biggest brand in the premium segment. Galaxy devices accounted for 16% of global sales, down slightly from the 18% share it captured in Q1 2021. That decline isn’t because Samsung’s smartphones are less popular, though. It can instead be attributed to the later Galaxy S22 series launch, with the Ultra model hitting shelves in late February and the other two following in March.

But that late launch wasn’t enough to stop the Galaxy S22 Ultra. It leapfrogged the competition with one month of sales to become the most popular Android flagship in the world, capturing a 3% market share in the process.

It’ll remain to be seen if Samsung can recreate this success in the current quarter, but things were certainly off to a great start. Not only was the S22 Ultra the most popular Android flagship in April, but also the most popular Android phone overall.In addition, foldables are contributing nicely to Samsung’s performance. Their volume grew 184% year-on-year in the premium market last quarter, with the category’s combined share now at 3%.

At one point it looked like Huawei was unstoppable, with the brand slowly eating away at Samsung and Apple’s share over several years. This came to a radical halt in 2018 and in Q1 2022 Xiaomi officially replaced it as the third biggest premium brand. It has slowly been gaining popularity in and outside of China thanks to consistent launches. The same can be said about Oppo and Vivo, which have started to focus heavily on Europe with recent launches.

As for the overall premium smartphone market, it’s only growing in dominance. It now accounts for 29% of shipments and 65% of the industry’s profits, compared to 18% and 46% respectively five years ago. The most expensive devices are only becoming more popular too. Products priced above $1,000 now account for almost 30% of premium sales, up from under 10% only twelve months ago.