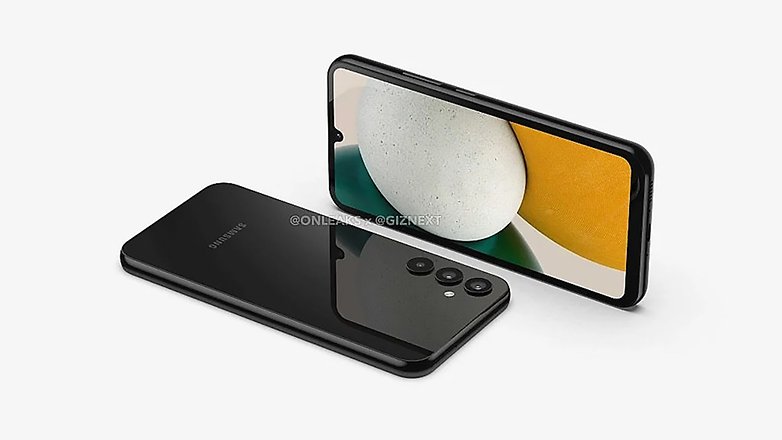 Samsung is unifying the design of its entire Galaxy smartphone lineup in 2023. The renders of the budget mid-range Galaxy A34 (5G) have been shared today. It confirms that the forthcoming device will be stuck with the notch for another year, though some parts could be undistinguishable to more expensive models like the Galaxy A54 and Galaxy S23.

Popular leaker OnLeaks delivered a set of high-quality images of the purported Samsung Galaxy A34. From the looks of it, the next-gen Galaxy handset should be sharing the flat panels and rounder sides with the Galaxy S23. Noticeably, the sloping camera island on the Galaxy A33 is also replaced by camera cutouts on a vertical array.

The infamous notch is here to stay

It’s on the front where the Galaxy A34 is unchanged with a U-shaped notch. Apparently, the Galaxy A54 that leaked last time is the only one benefiting from the punch-hole design. Samsung’s decision indicates that it could use the same high-resolution 6.4-inch AMOLED display eventually found on the predecessor.

As regards other features of the Galaxy A34, the quad camera is reduced to a triple setup, which corroborates with the previous report of Samsung dropping the depth sensor. It’s unclear if the 48 MP main and 8 MP ultrawide snappers will be improved together with the selfie camera.

More importantly, it is now reported that Samsung will equip its mid-range devices with new Exynos processors. The Galaxy A14 and M14 will share the Exynos 1330 while the Galaxy A34 and Galaxy A54 are likely to utilize the faster Exynos 1380 SoC.

Galaxy A34 price and release date

The Samsung Galaxy A33 debuted for the price of $299 in March this year. So, it is safe to assume that its successor should arrive at the same timeline. The source didn’t reveal the pricing for the Galaxy A34, but we don’t expect any price shakeup considering how timid the smartphone sales were in 2022.

Will a notch design matter in your next smartphone purchase? We’d love to hear your thoughts on this.

Panel: What do you hope to materialize when Artur Beterbiev and Anthony Yarde fulfill tonight? - Boxing News Wayne Alexander...

Buying guide: The best portable power station with solar option | News 4 Social In the following table, we have...

Price: (as of - Details) A51's Infinity-O Display optimizes visual symmetry. Now you can game, watch, surf, and multi-task without...

Have you heard about career cushioning? | News 4 Social

Have you heard about career cushioning? | News 4 Social As the tech sector recovers from 2022’s mass layoffs, many...

Galaxy A54 is getting a faster WiFi—Here's how quick will it be | News 4 Social The Galaxy A54's specs...