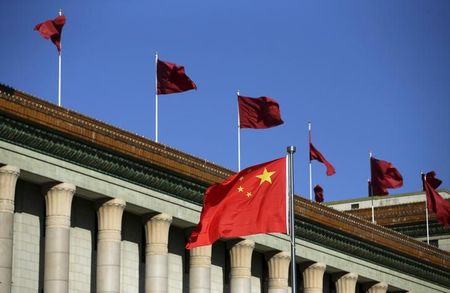 The (PMI) read 50.1 in September, data from the government showed, beating expectations of 49.6, and higher than last month’s reading of 49.4.

A reading above 50 is considered as expansion territory.

A separate showed the country’s manufacturing PMI shrank to 48.1 in August from 49.5 in the prior month.

The Caixin reading differs from the official one in its scope of companies surveyed. Caixin surveys a smaller focus group consisting of more private enterprises, while the government survey covers a bigger focus group and mostly state-owned industries.

The lifting of COVID restrictions in economic hubs Chengdu and Shenzhen appeared to be the biggest driver of activity, as factories were able to resume production at increased capacity. The manufacturing sector is seen as a bellwether for the world’s second-largest economy.

Still, COVID-related disruptions continued to weigh on other parts of the economy, with China’s non-manufacturing PMI falling to 50.6 in September from 52.6 in the prior month.

China’s composite PMI, which is an overall indicator of economic activity, fell to 50.9 in September from 51.7 in the prior month. COVID restrictions on movement are also expected to slow activity during a week-long holiday in October.

A series of COVID lockdowns, coupled with a power shortage and a weakening yuan severely crimped Chinese economic activity this year.

But this saw the government rolling out a slew of stimulus measures to shore up economic growth, including increased infrastructure spending and interest rate cuts by the central bank.

Still, the Chinese government is reluctant to scale back its zero-COVID policy, which is at the heart of China’s economic woes this year.

This has also adversely affected the , which recently plummeted to a record low in offshore trade. The currency reacted negatively to the data, with the falling 0.4%.

U.S. stocks are falling as investors look ahead to Friday’s jobs report

U.S. stocks are falling as investors look ahead to Friday's jobs report By Liz Moyer Investing.com -- U.S. stocks were...