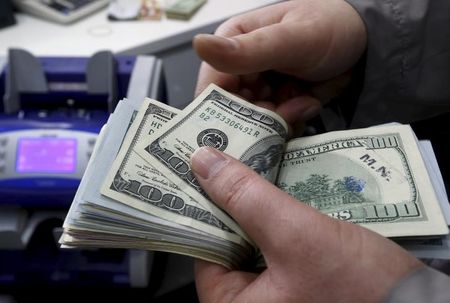 New York, Oct 2 (IANS) The dollar wrapped up its biggest quarterly climb in at least seven years on Friday, along with its largest four-month advance since November 2008 — the latest chapter in what has been a historic year for the greenback, MarketWatch reported.

In September, a month where the dollar briefly touched its highest level since 2002, the rose 3.2 per cent, marking its best month since April, when it rose 4.73 per cent.

Thanks to its strong gains during the first nine months of the year, the dollar could be on track for its best annual performance since 2014, when the dollar index rose nearly 13 , MarketWatch reported.

Many of the dollar index’s key components have also weakened precipitously against the greenback as the Federal Reserve’s aggressive interest rate hikes have boosted the greenback relative to its foreign rivals.

The euro was down 6.5 per cent since the beginning of the quarter through Thursday, it’s largest such drop since the fourth quarter of 2016. The shared currency has now weakened against the greenback for five consecutive quarters, falling 17.3 per cent in that time – its worst five-quarter stretch since September 30, 2015.

In Japan, the decision by the Bank of Japan to keep monetary policy easy has caused the Japanese yen to shed more than 25 per cent of its value relative to the dollar so far this year, leaving it at 144.8 yen to the dollar on Friday after the yen touched its weakest level against the dollar since the late 1990s earlier this month.

The dollar rose 6.7 per cent against the Japanese currency in the third quarter, bringing the dollar’s advance over the past 12 months to 30 per cent, the largest such move against the yen in more than 50 years.

The pound fell 8.3 per cent against the dollar during the third quarter, its largest such drop since the fourth quarter of 2008.

Already the world’s most popular reserve currency, the dollar’s strength this year has been driven by a number of factors, including the Federal Reserve’s aggressive interest rate hikes, along with the relative stability of the US economy and labor market, MarketWatch reported.

All of these factors have helped make the greenback a port in the storm for investors searching for succor from this year’s punishing selloff in stocks and bonds.

“The selloff has transformed [dollar] cash into the ultimate safe asset, further boosted by the rise of US real rates and yields on the back of the Fed’s credible commitment to bring down inflation,” said Valentin Marinov, head of G-10 currency research and strategy at Credit Agricole (EPA:), in a recent note to clients, MarketWatch reported.

3 Insurance Stocks with ‘Highest’ Profit Margins! The insurance sector in India is experiencing upward growth which can primarily be...