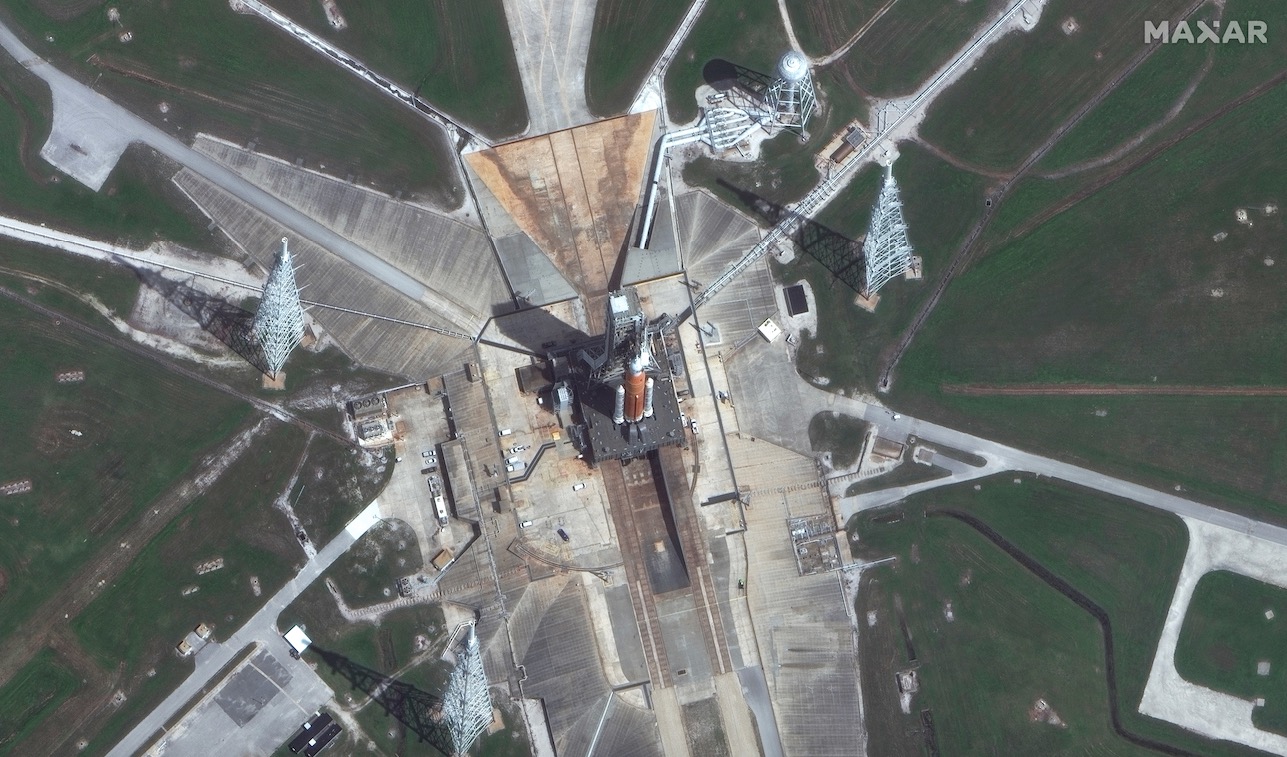 NASA’s next moonshot is finally upon us.

The agency plans to launch its Artemis 1 mission at 8:33 a.m. EDT (1233 GMT) on Monday (Aug. 29) from Kennedy Space Center in Florida, using a Space Launch System (SLS) megarocket to send an uncrewed Orion capsule on a 42-day journey to lunar orbit and back.

NASA has been preparing for Artemis 1 — the first flight for SLS and the Artemis program of moon exploration — for years and is now in the home stretch. Here’s a brief rundown of the major mission milestones to watch for, both before and after launch. (You can learn about the milestones in much greater detail in NASA’s Artemis 1 press kit (opens in new tab).)

The Artemis 1 countdown will officially begin at 10:23 a.m. EDT (1423 GMT) on Saturday, when the launch team members arrive at their stations.

These folks will check off a number of milestones over the next 14 hours or so. For example, the team will fill the water tanks for the sound-suppression system at Kennedy Space Center’s Launch Pad 39B, which will host the Artemis 1 liftoff. They’ll also power up the SLS upper stage and core stage and begin getting the core’s four RS-25 engines ready to go.

Early Sunday morning, the Artemis 1 team will charge the flight batteries on Orion and the SLS core stage, among other tasks. That evening, about 12 hours before liftoff, all non-essential personnel will leave Pad 39B. Around that same time, the team will activate the mission’s ground launch sequencer (GLS), a software program that automatically manages the final portion of a countdown.

Late Sunday night, nine hours and 40 minutes before launch, a built-in countdown hold will begin, and the Artemis 1 team will conduct a weather and fueling briefing. Just before midnight, the team will decide whether to start fueling up the SLS or postpone to another launch date.

If all goes according to plan, loading of the SLS propellants — liquid hydrogen and liquid oxygen — will begin early Monday morning, about eight hours before liftoff. This is a lengthy process with many steps, including “replenish” operations that keep topping off the rocket’s fuel, which will continue almost until T-0.

Another built-in countdown hold will begin at 7:53 a.m. EDT (1153 GMT), 40 minutes before liftoff. Then, at T-15 minutes, the launch director will poll the Artemis 1 team, asking everyone if the mission is “go” for launch. If it is, the GLS will start the terminal count at T-10 minutes.

Those final 10 minutes will be jam-packed with milestones, including the switching of Orion and both SLS stages to internal power and the termination of propellant replenish activities. Finally, at T-10 seconds, the GLS will send the command for the SLS core’s four RS-25 engines to start up. That will happen at T-6.4 seconds, and the Artemis 1 stack will rise off Pad 39B when the countdown clock strikes zero.

Two minutes and 12 seconds after launch, Artemis 1’s two strap-on solid rocket boosters will separate and fall toward the Atlantic Ocean. About a minute later, Orion will jettison its emergency launch-abort system and the protective fairing that covers its European-built service module.

The SLS core engines will shut down eight minutes and four seconds after liftoff, and the huge rocket’s two stages will separate 12 seconds later. Another 10 minutes after that, Orion will start deploying its solar arrays, a process that will take about 12 minutes.

Orion will separate from the SLS upper stage at 11:39 a.m. EDT (1539 GMT), two hours and six minutes after liftoff, embarking on its solo journey to the moon.

The discarded upper stage’s work isn’t done, however: It’s carrying, in a special adapter, 10 tiny cubesats that it must deploy. Those cubesats will perform a variety of work in deep space, from studying how radiation affects yeast DNA to hunting for water ice on the moon. According to astrophysicist and satellite tracker Jonathan McDowell, those cubesats will start deploying from the adapter three hours and 40 minutes after launch, and the last of them will be flying freely by about T+8 hours.

The Orion capsule and the service module that drives it, of course, will keep cruising toward the moon. This journey will take a while; according to the Artemis 1 press kit, flight days two through five will be devoted to “outbound transit.” On flight day six — Sept. 3 — Orion will begin a new phase, making its way toward a distant retrograde orbit (DRO) around the moon.

On Sept. 3, the capsule will perform an “outward powered flyby burn” and achieve its closest approach to the moon, skimming just 60 miles or so (100 kilometers) above the lunar surface. On Sept. 7 (flight day 10), Orion will fire up its engines again and slide into its designated DRO.

A day later, the capsule will get farther from Earth than any human-rated spacecraft ever has. The current record is held by NASA’s troubled Apollo 13 mission, which got 248,654 miles (400,170 km) from home in April 1970.

Related: The Apollo program: How NASA sent astronauts to the moon

Orion will stay in its lunar DRO for about two weeks. Then, on Sept. 21, the capsule will begin gearing up for the long journey back to Earth with a departure burn. Two days later, it will reach the mission’s maximum distance from Earth — about 280,000 miles (450,600 km).

Leaving the moon will be a roughly 10-day process. On flight day 35 — Oct. 3 — Orion will perform a “return flyby” engine burn, which will take the capsule within 500 miles (800 km) of the lunar surface. Orion will get a slingshot-like gravity assist from the moon to leave the lunar neighborhood and head back toward Earth.

The return journey will take a week. Finally, on Oct. 10, Orion will reunite with its home planet, splashing down in the Pacific Ocean off the coast of San Diego.

There’s a lot to look forward to, as you can see. Keep in mind, however, that these are target dates and times; the actual timing may differ depending on how the mission proceeds. And everything will change if Artemis 1 doesn’t get off the ground on Aug. 29; orbital dynamics dictates different mission lengths on other launch dates. (NASA is currently eyeing backup dates of Sept. 2 and Sept. 5.)