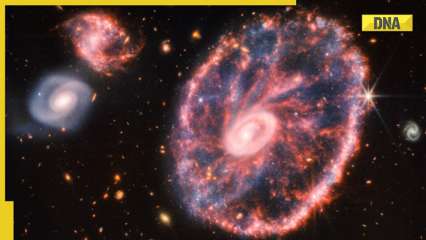 NASA has released stunning images of the Cartwheel Galaxy, located about 500 million light-years away. The image was captured by the powerful next-generation James Webb Space Telescope.

Webb, using its infrared cameras, produced a detailed image of the Cartwheel and two smaller companion galaxies against a backdrop of many other galaxies. The Cartwheel Galaxy, located about 500 million light-years away in the Sculptor constellation, is a rare sight appearing much like that of the wheel of a wagon.

The Cartwheel Galaxy sports two rings — a bright inner ring and a surrounding, colourful ring. These two rings expand outwards from the centre of the collision, like ripples in a pond after a stone is tossed into it. Because of these distinctive features, astronomers call this a “ring galaxy,” a structure less common than spiral galaxies like our Milky Way.

The bright core contains a tremendous amount of hot dust with the brightest areas being the home to gigantic young star clusters. On the other hand, the outer ring, which has expanded for about 440 million years, is dominated by star formation and supernovas.

As this ring expands, it ploughs into surrounding gas and triggers star formation. In the image, data from the Near-Infrared Camera (NIRCam), are coloured blue, orange, and yellow.

The galaxy displays many individual blue dots, which are individual stars or pockets of star formation. NIRCam also reveals the difference between the smooth distribution or shape of the older star populations and dense dust in the core compared to the clumpy shapes associated with the younger star populations outside of it.

MIRI data, coloured red in the composite image, reveals regions within the Cartwheel Galaxy rich in hydrocarbons and other chemical compounds, as well as silicate dust, like much of the dust on Earth.

READ | What is high cholesterol? Know signs, symptoms to look out for

Other telescopes, including the Hubble Space Telescope, have previously examined the Cartwheel. But the dramatic galaxy has been shrouded in mystery — perhaps literally, given the amount of dust that obscures the view. Webb, with its ability to detect infrared light, now uncovers new insights into the nature of the Cartwheel.

It also provides a new view of how the Cartwheel Galaxy has changed over billions of years. It also reveals new details about star formation and the galaxy`s central black hole.

The telescope`s actual aim is to solve mysteries in our solar system, look beyond distant worlds around other stars, and probe the mysterious structures and origins of our universe and our place in it.

Stunning examples of modern high-tech architecture (Pocket-lint) - Tech is a bit of a hard thing to contain, nowadays. Where...

Price: (as of - Details) Galaxy S21 Ultra 5G is crafted so you don’t need to choose between video and...

Price: (as of - Details) Unfold your world and achieve next level productivity with Samsung Galaxy Z Fold4. This is...