Cardano founder: With ADA and XRP, we moved mountains to revolutionize ecosystem 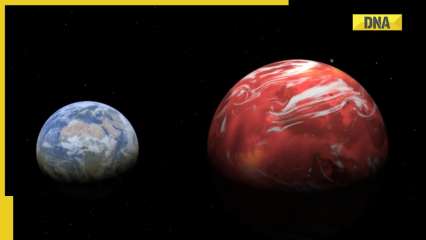 Another exciting discovery in the search for answers about life has been made by scientists. In its first discovery by a new instrument, Japan’s Subaru Telescope spotted the ‘Super Earth’ skimming the habitable zone of a red dwarf star at a distance of just 37 light-years from the Earth. In astronomical distances, you could call that is really, really close!

The newfound planet which is four times bigger than our Earth gives the opportunity to search for the possibility of life on other planets apart from ours. The find is also significant because the infrared observational instrument opens the possibilities of discovering more such planets around red dwarf stars, which are typically difficult to study as they don’t emit much visible light compared to stars like our Sun.

Bonus: Check out NASA’s simulation of Ross 508b and comparison with Earth here.

Does the ‘Super Earth’ harbour life?

Named Ross 508b behind the red dwarf star Ross 508 which it orbits, the planet has 4X the mass of Earth. It is just 37 light years away from us, located in the Serpens constellation. Interestingly, compared to our 365 day year, one year on Ross 508b equals just 11 Earth-days.

A recently discovered exoplanet skims in and out of its star’s habitable zone. It’s 37 light-years from Earth and about four times our planet’s mass, making Ross 508b a super-Earth. A year there, one orbit, takes just 10.8 days! https://t.co/qmEDhIuS3A pic.twitter.com/MW7Cap45If
— NASA Exoplanets (@NASAExoplanets) August 3, 2022

The planet is located at the inner edge of the habitable zone surrounding the Ross 508 star. The observations suggest that the orbit of this Super Earth is elliptical, which may make it lie in habitable zone at times. This means it can have the required conditions for water to exist on the planet’s surface in liquid state. Further study will only be able to suggest more about the possibility of life or existence of water on the planet.

Apple Unlikely To Bring Touch ID On iPhone 15 Series Next Year Apple is not keen on bringing the Touch...

Combination of 5G, AI, M2M and IoT is Bringing the World Closer to a Connected Future, IDEMIA

Combination of 5G, AI, M2M and IoT is Bringing the World Closer to a Connected Future, IDEMIA As India...

These iOS 16 Camera And Photo Features Are Incredibly Useful

These iOS 16 Camera And Photo Features Are Incredibly Useful Now that the dust has finally settled after everything Apple...

ISRO Loses Mangalyaan As India's First Mars Mission Runs Out Of Battery India’s Mars Orbiter craft has run out of...

HRKatha’s Automation.NXT Conference Puts the Spotlight on HR’s Role in Digitalisation Holiday Inn, Aerocity was the venue for interesting...